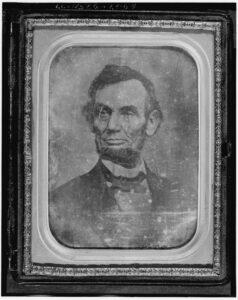 Besides payment of monies for lands ceded, the treaties of 1851 also called for setting up reservations on both the north and south sides of the Minnesota River. But the U.S. Senate changed the treaties by eliminating the reservation and leaving the Dakota with no place to live. Congress required that the Dakota had to approve this change before appropriating desperately needed cash and goods. President Millard Fillmore agreed that the Dakota could live on the land previously set aside for reservations – until it was needed for white settlement.

By 1862 failed promises and a collapsed Dakota economy directly contributed to the tragedies of the U.S. Dakota War. George Day was appointed to investigate Minnesota Indian policy by the United States Senate in 1861. His report to President Lincoln on New Year’s Day 1862 was less than complimentary.

Day stated, “traders [are] the greatest curse of the Indians and the curse of the nation for they boast they can control Congress and have done it.” He uncovered fraud among some government agents too. “The SuperintendentMajor [William] Cullen, alone, has saved, as all his friends say, more than 100 thousand [dollars] in four years out of a salary of 2 thousand [dollars] a year.”

“The whole system is defective and must be revised,” Day wrote. “Or your red children, as they call themselves, will continue to be wronged and outraged and the just vengeance of heaven continue to be poured out and visited upon this nation, for its abuses and cruelty to the Indian.” 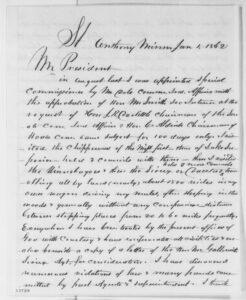 Letter from George E.H. Day to Abraham Lincoln, Wednesday, January 01, 1862 (Report on Indian affairs in Minnesota). From the Abraham Lincoln Papers at the Library of Congress. Transcribed and Annotated by the Lincoln Studies Center, Knox College. Galesburg, Illinois.

You can learn more by reading titles such as Ella Deloria’s Speaking of Indians, Bill Lass’s Treaty of Traverse des Sioux, David Nichol’s Lincoln and the Indians, and Gary Clayton Anderson’s Kinsmen of Another Kind.

Your ticket for the: NUMEROUS TREATY VIOLATIONS