“Father, you think it a great deal you are giving for this country.  I don’t think so, for both our lands and all we get from them will at last belong to the white man.  The money comes to us, but will all go to the white men who trade with us.” ~ Opiyahedaya (Curly Head), July 23, 1851 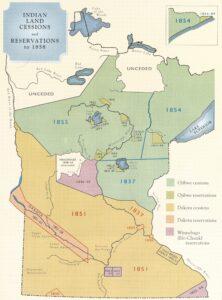 Minnesota became a territory in 1849. White settlers were eager to establish homesteads on the fertile frontier. Pressured by traders and threatened with military force, the Dakota were forced to cede nearly all their land in Minnesota and eastern Dakota in the 1851 treaties of Traverse des Sioux and Mendota.

Luke Lea, U.S. Commissioner of Indian Affairs, Territorial Governor Alexander Ramsey, and others arrived at Traverse des Sioux on June 29, 1851. By July 19th, some Dakota bands still had not arrived. Ramsey declared, “your Father, who is here from Washington… has no time to spare… he has given you more than three long weeks, it is unfair to ask him to stay any longer.” 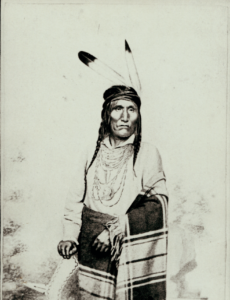 Mazasha (Red Iron) was one of the Dakota leaders to sign the Treaty of 1851 and immediately after realizing that they had been tricked into signing the “Traders Paper” he protested the payments to the traders.

Many of the Sisseton and Wahpeton Dakota leaders expressed their concerns and non-support, but eventually reached consensus and signed the treaty. Dakota leaders believed the U.S. treaty promises would supplement their faltering hunting and gathering economy. Through past experiences, they hoped their Euro-American relatives would reciprocate their gift of land with an initial payment of cash and annual annuities.

Leaders were tricked into signing the “Traders Papers.” The illegal document, though still enforced, siphoned large amounts of money from the treaty to pay alleged Dakota debts. In the end the Treaty of Traverse des Sioux failed to contribute to a new sustainable life for the Dakota.

Forced onto small tracts of land, with less than they were promised, the Dakota became further dependent on a government that was less willing to honor agreements.

The Sisseton and Wahpeton Dakota bands sold 24 million acres to the U.S. Government that included basically everything southwest of I-94 in MN (Moorhead to St. Cloud), as well as a sizable chunk of northern Iowa, and eastern South Dakota. The price to be paid to the Dakota (promised by the treaty) was $1,665,000 (about 7 cents per acre). However, that amount was never paid. Congress and President decided to disburse funds as follows:

Other money was set aside for different funds:

The principal itself was never to be paid. Of the remaining amount (approx $305,000 including $68,000 in interest) it was paid as follows:

The remainder was distributed among the chiefs.

Today, the original signing site is marked by a boulder opposite the present Treaty Site History Center at the northern end of Old Minnesota Avenue in St. Peter, Minnesota.

You can learn more by reading titles such as Ella Deloria’s Speaking of Indians, Bill Lass’s Treaty of Traverse des Sioux, David Nichol’s Lincoln and the Indians, and Gary Clayton Anderson’s Kinsmen of Another Kind.

Your ticket for the: 1851 TREATY OF TRAVERSE DES SIOUX