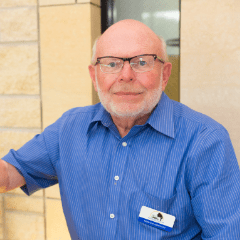 Loren grew up in North St. Paul and graduated from the University of Minnesota with a degree in pharmacy. He worked his entire life as a pharmacist starting in Albert Lea. In 1973 Loren moved his family to St. Peter and worked as a pharmacist at “Econo” and in 1998 took a position at the Regional Treatment Center where he worked until he retired in 2005. Loren is married to Roxane and between them, they have five children and one granddaughter.

Loren’s interests are in American history with a special interest in western and Minnesota history. In his spare time, he and Roxane are trying to visit as many museums as possible. Loren has been an active volunteer at NCHS for over a decade. Also, he served as Chairman for the St. Peter Preservation Commissions which he was active with for many years.

Your ticket for: Loren Sundboom