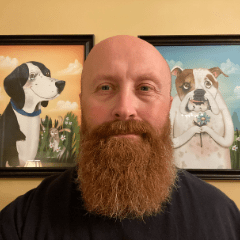 Loren is originally from Surrey, North Dakota. He served in the North Dakota Army National Guard from 1995-2001. He returned to college in 2008 and completed a Bachelor of Arts degree with a double major in History and Sociology from Minot State University in 2013. In the fall of 2013, he and his wife Kymn moved to the area, and he began working on a Master of Science degree in History from MSU-Mankato; and in 2014, he completed an internship at NCHS. Loren currently works as personal lines underwriter for American Family Insurance and lives in North Mankato with his wife and dogs. He has also recently been appointed an ambassador for Mission 22, a non-profit organization dedicated to healing America’s veterans when they need it most.

Your ticket for the: Loren Files